Vivian Louise (Andersen) Ohl was born Oct. 9, 1928, to David and Vera (Parker) Andersen in Harlan. She was raised in Harlan until she was 12, and then the family moved to a farm between Earling and Dunlap, and she attended Dunlap High School. She worked in Dow City at Daniel’s Produce. On Dec. 2, 1944, Vivian married Francis Ohl at the Lutheran Church in Carroll. The couple lived near Dow City, and then they moved to Carroll. She then worked for Ocoma Foods in Carroll. In 1953, the family returned to the Dow City area and farmed. They also farmed near Dunlap and Logan, and in December of 1964, they purchased a farm near Magnolia. Vivian helped with the farming and was also an Avon and Shaklee representative. Vivian also worked at Harvey Foods in Logan in the bakery area. In 1996, Vivian and Francis built a home in Woodbine.

A private family funeral service was held on Monday, Nov. 2, 2020, at Fouts Funeral Home in Woodbine. The clergy was Rev. Chuck Snow and the musicians were Nancy Foutch and Sue Benedickt. Sue sang “What a Friend We Have in Jesus” and there was a recorded musical selection of “Back to God” by Reba McIntire. The honorary pallbearers were: Michelle Godden, Karen Kelley, Colleen Lilly, Cari Ohl, Cheri Anderson, and Marnie Jacobsen. The pallbearers were: Kyle Hammitt, Dallas Jacobsen, Rod Ohl, JR Ohl, Doug Holcomb, Mike Godden, Tristan Jacobsen and Cayden Ohl. The final resting place is at the Woodbine Cemetery.

Fouts Funeral Home in Woodbine was in charge of the arrangements. www.foutsfuneralhome.com

Harrison County Humane Society reaches out and branches out 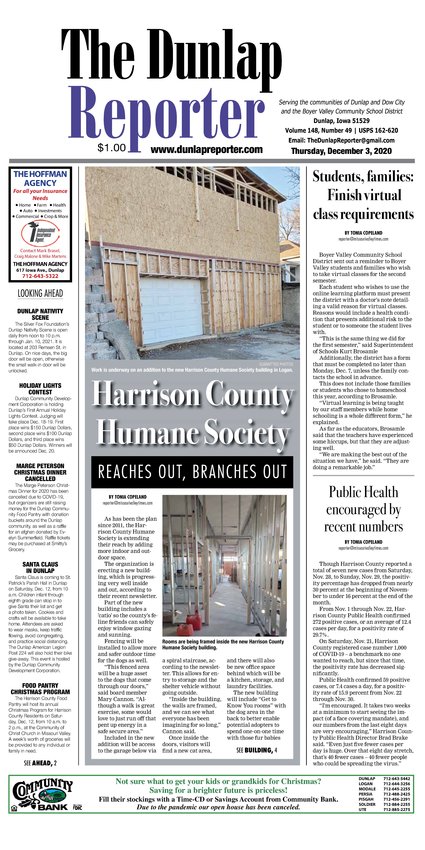