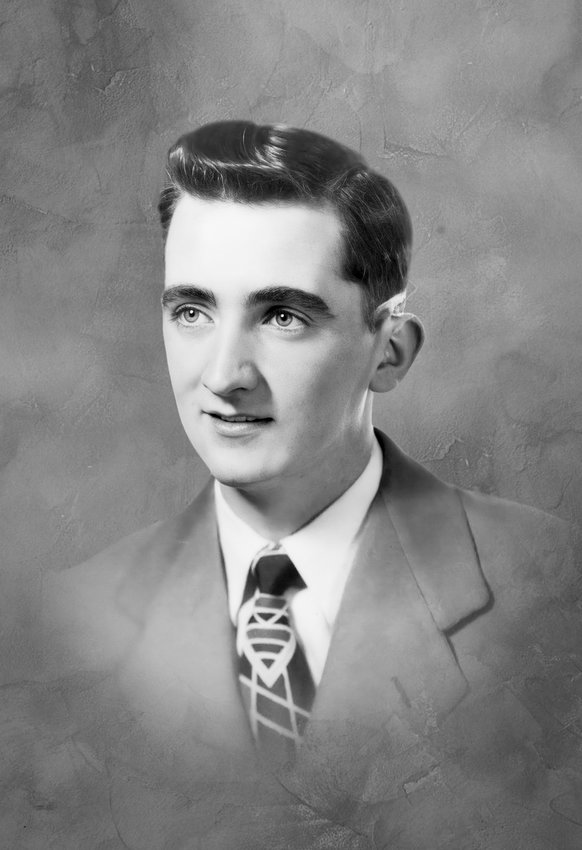 Richard Samuel Sanford, born on Jan. 21, 1931, to Richard and Esther (Hofstead) Sanford in Beresford, S.D., died on Tuesday, March 29, 2022, at Azria Health Rose Vista Nursing Home in Woodbine.  He was 91 years old. On the eve of Richard’s death, he was surrounded by his four daughters and their extended families that all loved him so much. He always joked about how he was outnumbered by all his girls. His wife, Julia, who preceded him in death, hung a sign in the bathroom that said there is a special place in Heaven for the father of girls. He is described by his daughters as loving, hardworking, supportive, polite, witty, loyal, humble, humorous, thrifty, sometimes stubborn, a puzzle master and the lover of meatloaf on Mondays. Richard loved to laugh and tinker with his new inventions out of cardboard and Tide bottles. He weaved a legacy of love and acceptance of others into the fabric of his entire family.

Richard graduated from Central High School in Sioux City in 1949. After graduation, Richard entered the United States Air Guard. On Nov. 16, 1951, Richard married Julia Ann Zwak in the Presbyterian Church in Sioux City. The couple moved to Bangor, Maine and then Plainville, La. while Richard was in the service. After his honorable discharge, the couple returned to Sioux City where Richard attended Morningside College for three years where he studied accounting and did part-time work until they took over the management of Julia’s fathers’ business, Sioux City Carving, after his father-in-law died. They moved the business to Dunlap and renamed it Dunlap Furniture Frames in 1966. They closed the business in 1972 and from there on Richard worked in the freight industry.

Richard was preceded in death by his parents; wife, Julia whom he was married to for 64 years; brothers, Clayton Sanford and Milford Sanford; sisters, Ione Moon and Leone Brown. He is survived by his four daughters, Chris (Gary) McDonald of Lakeview, Debra Shaffer of Bellwood, Neb., Treva (Fanny) Block of Dunlap and Lisa Bussard of Nashville, Tenn.; nine grandchildren; seventeen great-grandchildren; and many other relatives and friends.

Richard lives on through the hearts of his children, grandchildren and great-grandchildren.  His life was a life well lived.

A funeral service was held on Friday, April 1, 2022, at the United Methodist Church in Dunlap. The service was led by Pastor Aaron Terwilleger and Pastor Dan Stuck. The musicians were Barb Amsberry, JD King and Richard’s grandchildren and great-grandchildren. The songs were “Amazing Grace”, “I Will Rise”, “You Are My Sunshine” and “Scars in Heaven”. The honorary pallbearers were Jessie Rose, Katie Dumbaugh, Carrie Wilson and Morgan Bussard. The pallbearers were Brent McDonald, Brad McDonald, Jeremy Block, Lucas Shaffer, Andrew Bussard, Trevor Wilson, Tom Dumbaugh and Landon Dumbaugh. Richard’s final resting place is at Pleasant Hill Cemetery in Dunlap.