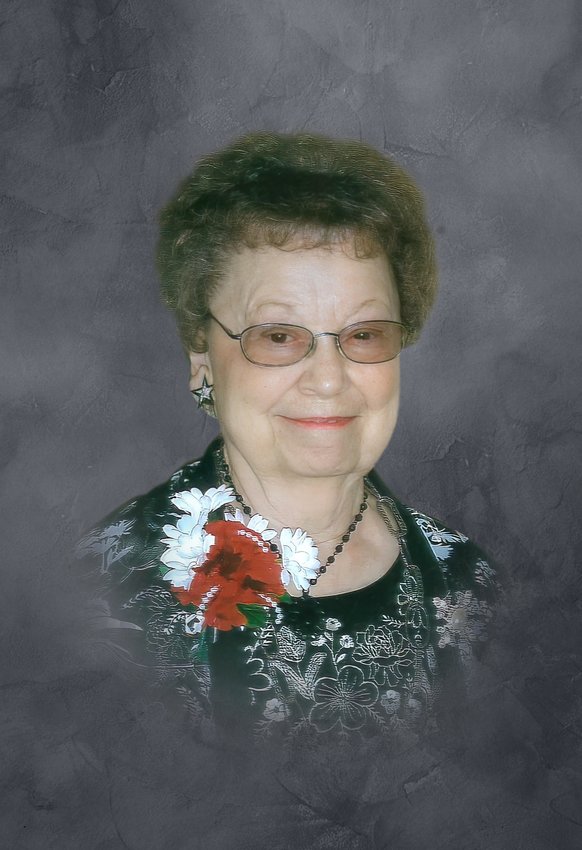 Evelyn Christine (Siemer) Jochims, 99, died on Saturday, April 17, 2021, at the Dunlap Care Center. She was born on Dec. 26, 1921, to Henry and Christine (Losch) Siemer in Dow City. Evelyn grew up on a farm outside of Dow City and was truly loved by her older brother, Ben Siemer. She graduated from Dow City High School in 1940. After two years of courtship, LaVerne Jochims and Evelyn Siemer were united in marriage on June 8, 1942, at the St. Patrick Catholic Church in Dunlap, where they remained parishioners for decades.

The couple moved out to a farm northwest of Dunlap where they raised four children. As a housewife, gardener and loving parent, Evelyn worked hard to keep the farm going and the mouths fed. In 1978, Evelyn and LaVerne built a home in town and started a new chapter of their lives. Evelyn was active within the Catholic Daughters and Alter Society where she held several office positions throughout the years. She enjoyed her days at the Senior Center where she was elected President multiple times. Evelyn and LaVerne volunteered for Meals on Wheels and delivered meals around town in all kinds of weather. They enjoyed dancing at the Gold Slipper in Dunlap and were members of the Woodbine Dance Club. They were also award winning 4-H leaders for the Boyer Rooters and volunteered their time for 20 years.

When LaVerne passed away in 1997, Evelyn continued to live in Dunlap where she enjoyed gardening, bowling, visiting her grandchildren, spending time with the residents at the Dunlap Care Center and sharing laughs at the Ode-E-Oh Club.

A Mass of Christian Burial was held on April 20, 2021, at St. Patrick Catholic Church in Dunlap. Rev. Joel McNeil presided over the service and the music was run by Rick Rannells. The recorded musical selections were “Immaculate Mary”, “Prayer of St. Francis”, “The Servant Song” and “Be Not Afraid”. The readers were Rochelle McGill and Grace Miller. The pallbearers were Evelyn’s grandchildren, Melissa Johnk, Ryan Jochims, Rochelle McGill, Laura Probasco, Leah Burns, Sara Probasco, Grace Miller and August Miller. Evelyn’s final resting place is at the Pleasant Hill Cemetery in Dunlap.